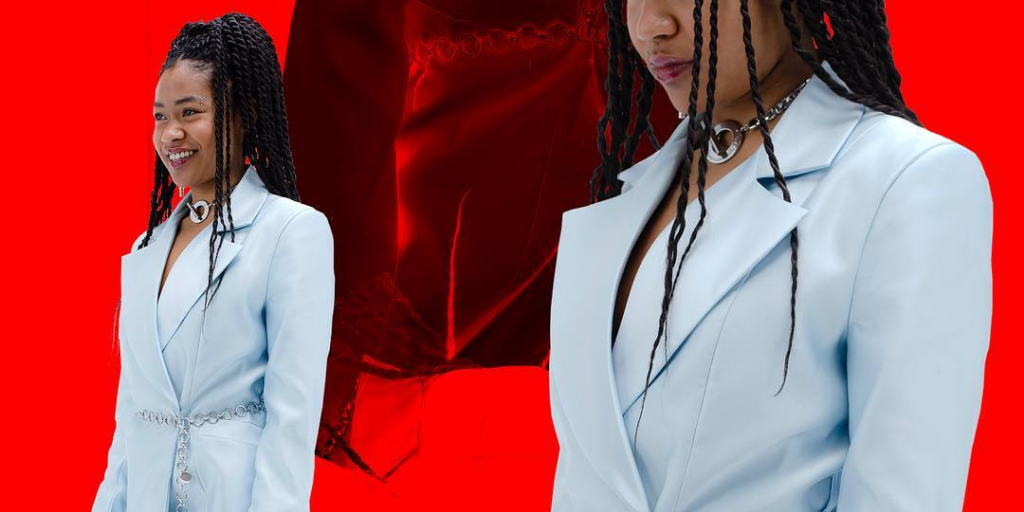 The latex designer and Netflix star is saying ‘Sayonara Slutz!’ in order to make a bigger impact on sustainability

As a great prophet once said: “This is the year of just realising stuff and everyone around me we’re all just realising things.” Claire Yurika Davis has definitely spent the year following in Kylie Jenner’s footsteps, trying to get a good grasp on what she wants, learning tarot, and reading books. Then it clicked. After seven years at the helm of her cult brand Hanger Inc, she’s decided she’s done with designing.

“I was like ‘why is the designer always bottom of the pile?’ We literally do everything and I’m fucking sick of it,” says the 29-year-old. When we connect via video chat, she’s sat in her Hackney studio, which she describes as “fucking grim” (she’s a fan of expletives) as it’s cold and poorly insulated. The building which was formerly a car park may have its quirks but it has provided a home for Claire’s sustainable latex brand and it’s where she’s created sexy looks for free-spirited and sensual fans.

Marrying storytelling with her love of design, she strived to create a narrative for each collection as if it were the wardrobe of different characters. For example, The Temple of Sleepy Chan, a fashion film she created with filmmaker and friend Jade Jackman invokes the leisurely pace of Japanese tea ceremonies to create a sanctuary from the fast pace of modern life. In the clip, the characters yearning for this slice of escapism are dressed head to toe in Hanger looks. From skin-tight skirts to tailored flesh-like coats, the brand is a haven for those with a hunger to challenge the status quo.

Given the strong ethos of Hanger Inc, Claire also had a conundrum: is the best way to push sustainability in the fashion industry to produce even more? “I don’t want to make clothes to change people’s points of view or behaviour anymore. I was searching for a way that seems less hypocritical,” she says. Instead, she’s going to move into consulting, helping bigger brands with established audiences to make more ethical choices so it comes from the top down.

Having had a completely sustainable brand where that mantra is evident in every area of the business, she would like to take this blueprint to others who currently think they’re making a difference by having one sustainable product or a tiny annexed sustainability team that lacks decision-making power. “I also just want to make sustainability a little cooler,” she adds.

While her tone is sardonic, she exudes warmth, particularly when it comes to her community. As she signs off as the brand’s owner, the final and tenth collection is a love letter entitled: Sayonara Slutz! “I wanted to do a latex remake of the dress I made on [a TV show called] Next in Fashion and I had a couple of other real slutty ideas I wanted to make,” she explains. “Barely there is very much our signature vibe as they were always our best sellers.” The racy collection was accompanied by a print sale, all profits were donated to charities centering POC in the UK as a way to give back during the pandemic.

Even though this London Fashion Week went ahead Claire thinks the pandemic should be used as a watershed moment to reevaluate the old guard. The industry, she thinks, could adopt a slower, more intentional approach rather than “pushing a shitload of product”. As the dust settles on LFW, it’s crucial to remember that Claire’s small and mighty brand is undoubtedly what is good about London’s fashion scene.

Her candidness is refreshing and raw, and her brand’s reputation was built on her ability to produce one banging collection after another that you actually see worn by, for lack of a better word, cool kids. She continued to refine and redefine her style with club-ready looks from daring cut out dresses and tailored jackets to airtight trousers that make the wearer look like a neatly-packed Babybel. “These were just things we would easily wear where we were hanging out at nights like PDA where you can find our people. There was no competition, it was just an expression.”

While her brand has provided her with a lot of joy, her decision to close it is down to the fact that there is a lot of unpaid labour that goes into running a brand. “We make these beautiful things, we lend them, we’re facilitators otherwise creatives and models would be naked but we never get paid and we hardly ever get the credit.”

“I just want to make sustainability a little cooler”

Anyone with an eye on an industry like fashion will be well aware there are so many unsung heroes, however, this came to a head for Claire during the filming of the Netflix series Next in Fashion. Yes, you may recognise her as one of the contestants hoping to win a chance to sell their designs on Net a Porter on the show that aired this year. Though it was praised for being the antidote to bitchy fashion reality television, when we bumped into each other shortly afterward in a bar in Dalston Claire revealed that she felt let down by the show.

“After the show came out, we were all in New York and [a producer] said to one of the other contestants that there was someone that she’d met that she thought she’d like and she didn’t. So basically she cut them out of the show,” she explains. Having watched the show again Claire realised that her full name, nor Hanger Inc, were never mentioned meaning that even though the show aired globally, she received less promotion and character development.

A still from Temple of Sleepy Chan, directed by Jade Jackman

“Everybody else gets theirs mentioned and there are images of their brand’s work and images of them in the studio. The only piece of my story they wanted to use was the ‘dead dad story’. Which is fucking lovely isn’t it, what a bunch of twats”.

Objectively, Claire was dealt a bad hand. She and her partner Adolfo Sanchez had to compete together, designing and constructing garments while having different styles and techniques. They were complete strangers to each other. Meanwhile, Marco Morante and Ashton Hirota, and Farai Simoyi-Agbede and Kianga ‘Kiki’ Milele, were best friends who had worked with each other before. “It was such a huge flaw in the show. I was told the teams had to be made up of people from different places but there were different rules for everyone. It showed that they knew who they wanted to go the distance,” she says.

“I’d rather set [Hanger Inc] on fire than give it to someone who’s vision I didn’t get, y’know?”

Then there’s the biggest drama of the series when Farai and Kiki (who worked for FUBU and House of Dereon, respectively) escaped elimination because Kerby Jean-Raymond of Pyer Moss fame refused to send home two black women during the streetwear week. Given that the aesthetic was inherently inspired by their previous work and racial community it was a difficult decision but they hadn’t performed well.

The framing of the pair as black women who needed saving did not extend to Claire who is both black and Japanese. “I thought of us as sisters, but they didn’t see that,” she says. It wasn’t the only time her mixed heritage rendered her invisible. Elsewhere she also felt like co-host Alexa Chung displayed Asian solidarity with Angel and Minju but not her. “If you’re not white mixed Asian you’re not in the gang essentially,” she adds. “You’re not likely to find me in a list of Japanese designers when you will find people who are white and Japanese considered. I forgot about all these feelings of being excluded until I got on the show.”

A still from Next in Fashion that captures Claire’s brand energy perfectly, courtesy of Netflix

In the end, Claire’s most prominent scene is her sulking at the fact that Farai and Kiki stayed in the competition making her look like the season’s villain. The night before that scene she’d got into a huge argument with her partner and was experiencing a “whirlwind of PMS” and when Tan France pulled her into a backroom to ask her if she was OK. She broke down and spoke about everything including the fact that Kiki and Farai were still there despite the fact that they were stapling clothes together. “I ripped the show apart from top to bottom, I said it was dogshit, I can’t help but say how I feel.”

Afterwards, she realised they had been covertly filming the entire conversation further adding to her theory that they didn’t ever have her best interests at heart. But she’s not angry at the producer in question. “At first I thought ‘go and step on lego’ but now, realistically, I feel a bit sorry for her. She has to live with being a bitch, that’s her cross to bear, and I hope to never meet her again,” she laughs.

In many ways, it sounds like Claire’s love affair with fashion has been on a steady decline since she started. She went to London College of Fashion for her foundation and UCA in Epsom for her degree (“both of which I fucking hated”) and felt that the dog eat dog culture left her feeling excluded. Her new chapter is finding a way to shift fashions culture on a larger scale as she’s been at the helm of her own company for long enough. “I don’t want to be the boss anymore, I don’t want anything to be focused on me in the future,” she says.

Recently she put out an open call for pitches to see whether she could find a worthy successor to take over the brand after her departure, but she “hasn’t had any good proposals” as of yet. “I’d rather set it on fire than give it to someone who’s vision I didn’t get, y’know?” she adds.

Although it’s a shame to be losing Claire’s designs at Hanger Inc, with her new aim of whipping other brands into shape via sustainability-focused consultancy at least we’re not losing her razor-sharp voice.

Afro Answers: why you should be rinsing your braiding hair and how to pay your hairdresser fairly

Inside Leicester’s ‘servant’ factories underpaying workers in the pandemic

Why are so many ‘expats’ xenophobic?