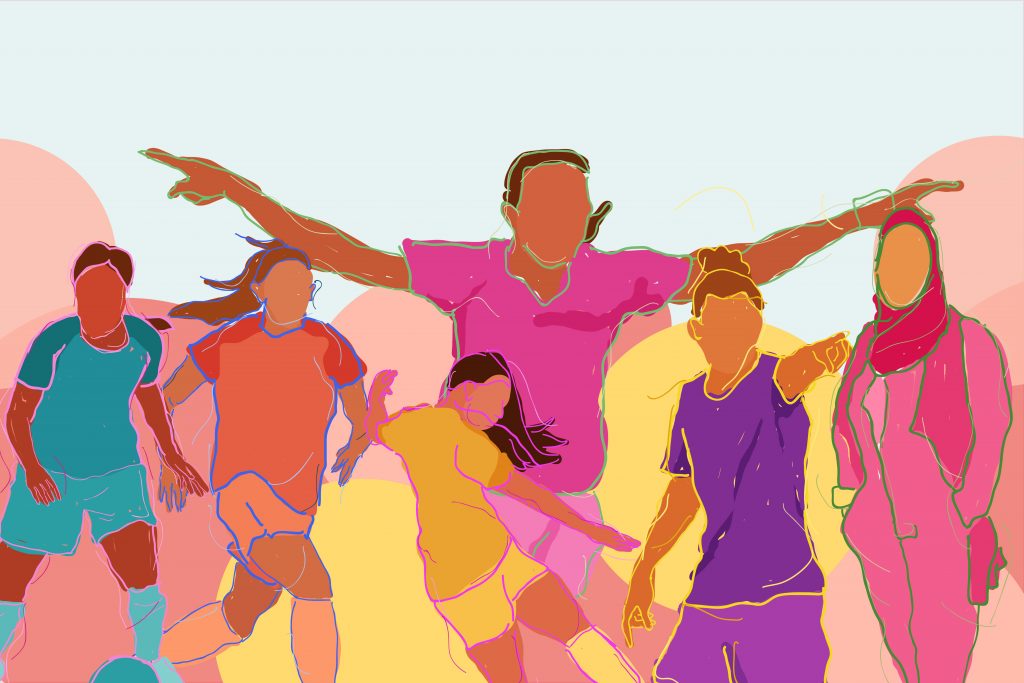 With over 720,000 tickets sold so far, headline sponsorship from the likes of Nike, Boots and Barclays and a sold-out final and semifinal games within 48 hours of ticket release – the FIFA Women’s World Cup has come a long way since it officially started in 1991.

In 2018, we finally saw recognition for Emma Clarke, Britain’s first black woman footballer, but there is a still a long way to go before the beautiful game is rid of racism and prejudice. Despite Bend it Like Beckham, women of colour have historically been underrepresented in the game. In the England women’s team this year there are only two players who aren’t white, Nikita Parris and Demi Stokes.

But there is plenty to be excited about both on and off the pitch as the best footballers take the world stage. Here are the women of colour to watch out for in this tournament, in the worlds of activism, punditry and, of course, on the pitch!

Football Writers Association Player of the Year and Women’s FA Cup winner and Continental Cup winner, it has been a busy year for the 24-year-old England forward Nikita Parris but with 24 goals in 27 appearances this season, she has always delivered and we hope for nothing less in France. Having recently announced her departure from Man City to join Lyon FC for 19/20 season for a new challenge, many fans were left heartbroken but are hopeful she will help the Lionesses bring it home.

On the pitch, she has power and pace to bring an excellent finish to nearly every game she plays but off the pitch, her work is equally important. It was only this year that she set up an academy, NP17, to help young people and students in her hometown of Liverpool. Seen as a role model by many young girls, she wants to give back to her community. Hopes are high for England and with David Beckham announcing her world cup squad place – from one number seven to another – Nikita is one to watch in this tournament.

Eni Aluko was well known for being the women’s league’s top goal scorer, but her career took a dark turn after she was forced to reveal the alleged racism of former England manager Mark Sampson in 2016. Despite having over 100 caps for England, Eni hasn’t played for the squad since.

But, things have improved. Named a “breakout star” of 2018 World Cup commentary, even though Eni won’t be playing, expect to see her on your screens. And when it comes to her sporting career? She’s moved to Juventus, playing alongside beauties like Sara Gama and recently retaining their league title in front of a record-breaking audience.

Two peas in a pod, identical twins Rosie and Mollie Kmita have quickly taken the professional game by storm. Having played together from as early as they can remember, it wasn’t until they were 24 years old that they took on different paths in their professional careers.

When West Ham was offered a promotion to the WSL, Rosie became the first player to sign their professional contract while Mollie took on the management of a nationwide football academy. Both have described their late father as being a huge support and driving force for their love for football and now want to continue to inspire the next generation of girls.

Rosie has now announced her departure from West Ham, but having ended the season as a Women’s FA Cup finalist, it will be interesting to see how her professional journey continues. Meanwhile, Mollie embarks on a new challenge, starting on a broadcasting journey with ESPN. Though neither of them are part of the Lionesses team heading to France, we will be seeing a lot of this dynamic duo as the tournament commences.

Now known as being a regular TV pundit and commentator for the likes of BBC Match of the Day, BT Sport and the first woman pundit on Sky Sports Super Sunday show, Alex Scott has proven time and time again that women’s voices need to be heard in sports media. As impressive as her broadcasting career is, she is also the second most capped England player, with 140 appearances. She has won nine league trophies, seven women’s FA cup titles and a UEFA Champions League title over her two spells at Arsenal Women’s FC.

Know as a trailblazer in women’s sport, Alex has been very open about the regular sexual harassment she receives on social media and how it has affected her mental health. However, Alex remains optimistic and hopes for a day that she is recognised as a football pundit and that the emphasis isn’t on her being a woman. We will certainly be hearing and seeing a lot of Alex as she takes to the world cup as one of their key presenters.

Shireen Ahmed: sports activist, consultant and co-host of Burn it All Down podcast

If you start researching champions of women in football off the pitch, it won’t take you long to find Shireen Ahmed. A sports activist, consultant and one-fifth of the feminist sports podcast Burn it All Down, Shireen has seen it all.

Now a successful and well-respected journalist and consultant in sports, the journey wasn’t always easy for Shireen. Because she wears a hijab, she was directly affected by rules instated by FIFA banning all headwear whilst playing as a “health and safety” risk. The ruling came to light when the Iranian National team took to the pitch for their qualifying game and were forced to walk off as they couldn’t play.

FIFA later lifted the ban, but Shireen was exhausted from the process and upset by all those lost years where she could have played. To make sure no child loses on a chance of playing sport, Shireen supported the campaign that successfully overturned the same headwear ban in basketball. She now sits on the advisory board of the Football Against Racism in Europe organisation. Although not on our screens, Shireen can be found on Twitter supporting the Canadian team.

Having previously competed in four world cup tournaments, Marta is no stranger to what it takes to succeed. She was crowned FIFA Player of the Year 2018, taking her to a record-breaking six award wins for the award.

Growing up in Brazil, Marta faced many of the barriers women have in football and was often discouraged from being involved as a girl. She, of course, didn’t listen and instead used it as a source of motivation to become of the world’s greatest footballers. When not playing football, Marta can be found in schools and local communities empowering and inspiring girls in her role as a goodwill ambassador for United Nation Women.

Her message to girls is “believe in yourself and trust yourself because if you don’t believe in yourself, no one else will”. She will be taking that energy and enthusiasm to turn Brazil’s historic world cup final 2007 defeat into a win.

Katee Hui set up grassroots girls football initiative Hackney Laces in 2011. Over the past eight years, it has mutated from a standard club to a support network, where the young women who play can expect to be championed in all areas of their lives. The club curates a positive environment by not holding trials, and by taking on girls of any age. They now work with over 200 young women in East London.

A Canadian who won a sports scholarship to university on the strength of her playing, Katee’s day job is as a strategy director at a creative agency. But, over the past two years, she has been getting more recognition for her football work. Grassroots initiatives are by their nature small fish in the big world of professionals, but their impact can be monumental. In 2018, Katee won the BBC Sport London Unsung Hero of the year award and more recently, Alex Scott made a surprise visit to the girls at who play for the team.

Despite being discouraged from playing football by parents and friends in Nigeria while she was growing up, Asisat Oshoala’s persevered. She went on to become the highest goal scorer at the 2014 FIFA U-20 Women’s World Cup and was named as the inaugural BBC Women’s Footballer of the Year in 2015, at only 20 years old. She recently signed a permanent deal with Barcelona Femini, after a stunning season where she helped lead them to the first ever Women’s Champion League final.

Her mission now is to educate – she takes her role as part of Nigeria’s women’s team, the Super Falcons, to extend to correcting inaccurate assumptions made about women players in her home country. Women’s football in Nigeria was recently described by a journalist as “the despised bride” of the sport, thanks to inadequate facilities and often non-existent welfare packages, plus poor salaries and medical care. Despite this, Nigeria has the best women’s team on the continent and there has been organised women’s football in the country since 1978. Going into the World Cup, Asisat doesn’t see her team as underdogs. They are, as she says, African champions.

Demi Stokes is often cited as the strongest member of the England squad, but after being overlooked for Mark Sampson’s squad in 2015, France 2019 will be the first time she will have ever played at a world cup with the senior team.

Taken out for eight months by a serious hip injury in 2018, Demi returned victorious at the beginning of 2019, celebrating her 100th club appearance with Man City and going on to win this year’s FA Cup Final. She joined the club in 2015 from the South Florida Bulls – originally beginning her career as a teenager with Sunderland. Demi has spoken out in the past about racist abuse she suffered on the pitch, but she says, “It’s all part of the journey, it doesn’t make it okay but you learn things and you grow from it”. At the world cup, expect to see her holding down the left back position and cutting in with some deadly tackles.