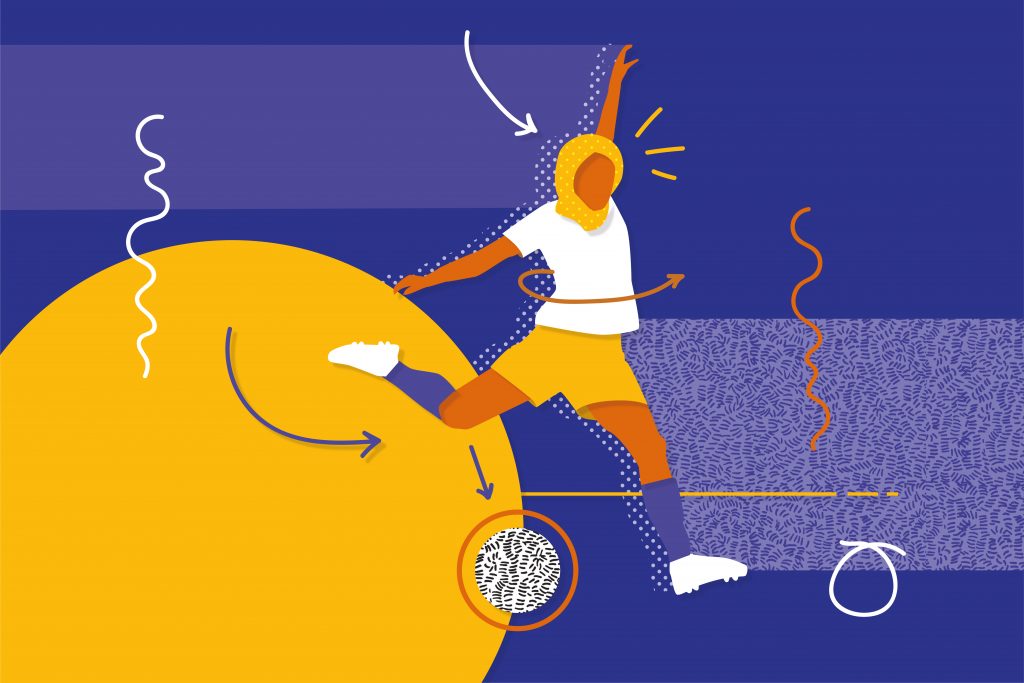 With the 2019 FIFA Women’s World Cup now in full swing, there are so many firsts to appreciate and applaud. Both South Africa and Jamaica qualifying. Argentina showing that they can truly perform on a world stage after they drew against Japan, despite not having played as a nation from 2015-2017 due to sexism and exclusion from the Argentine Football Federation. Brazilian forward Cristian Rozeira de Souza Silva not only scoring the first hat-trick of the tournament but overtaking Cristiano Ronaldo as the oldest player to have scored three goals in one match at a world cup tournament.

However, one first we are yet to see is a hijab-wearing player at a senior world cup. Much of this is to do with FIFA’s former ban on headwear, which was officially brought into play in 2007, and only lifted in 2014.

Hijab or headscarf is a traditional form of covering worn by some Muslim women as part of their religious and spiritual journey. But for many who wear the hijab, for a very long time, a career as a professional footballer was nothing but a dream. Growing up, I myself was affected by FA rules around the hijab. At the first match of the season I played for my team when I was 16, the game was delayed and the coach pulled me aside and said I couldn’t play because of my hijab. I ultimately left the club.

But the rule, which had the potential to affect thousands of women, was mostly unknown to the world at large.

The incident that brought the official ban about involved 11-year-old Asmahan Mansour in 2007. The Canadian youngster was at a tournament when she was told that to play with her team she would have to remove her hijab as it was a “health and safety risk”. Her team, from Ottawa, withdrew from the competition in response to the ridiculous ruling. However, Asmahan’s battle didn’t end there: she took her case to the Canadian Soccer Association and then to FIFA who upheld the ban and developed policy around it, stating the risk of injury and strangulation was too high.

“When I was 16, my first game of the season was delayed and the coach pulled me aside and said I couldn’t play because of my hijab”

With that ruling, the football journey for Asmahan, and millions of other hijab-wearing women and girls, ended for a further five years.

It wasn’t just on a grassroots level that this was affecting women. Professionals were being turned away simply for observing their faith. In 2010, Thailand was invited to replace the banned Iranian team in the Youth Olympics. The Iranians had been disqualified for refusing to play without their hijabs and left the grounds in tears.

Under pressure by national governing bodies to lift the ban, FIFA came to an agreement with the Iranian football federation and introduced the option of wearing caps that covered the hair and hairline (but not extending to the neck and ears). Although not ideal, it was a step towards changing a ridiculous and discriminative rule.

Unfortunately, in 2011 the Iranian national team came out to play against Jordan in what would have been an Olympic qualifier for London 2012, but despite already wearing the approved headwear they were again disqualified. 3-0 was awarded to Jordan. Heartbroken and left in tears once again, their dream of being Olympians was shattered.

One step forward, but two steps back – this was becoming a recurring theme with FIFA, but by the end of 2011, momentum had caught on and fans, players and members of the public had joined the campaign to lift the hijab ban.

If FIFA wanted to promote the world game, it was time for them to allow Muslim women to be part of that.

One fan and campaigner who was at the forefront of this was writer and women in sports advocate, Shireen Ahmed. For years, she would blog her hopes, gratitude and frustrations about the game. “For a very long time after I chose to wear hijab, I was excluded from playing in regular FIFA and Canadian Soccer Association sanctioned-clubs,” she wrote in 2012, after a hijab design by Elham Seyed Javad submitted to FIFA was accepted. “I have been playing football for almost 30 years. This decision is a victory for me, my daughter and her daughters,”

“It took years of campaigning, a new hijab design made with Velcro and the intervention of a Jordanian prince to lift the ban”

So finally, after years of continuous campaigning and knocking on the doors at FIFA, in 2014 they lifted the ban. Although elated and pleased with the decision to lift the ban, women like Shireen openly spoke about how exhausted the process made them. Alongside the campaigners, it took a new hijab design made with Velcro and the intervention of a Jordanian prince, who said he had found no evidence that the hijab had ever caused injuries on the pitch, to convince the International Football Association Board that it was the right move.

Within two years came the under 17-women’s world cup Under-17 Women’s World Cup in Amman, Jordan. It was the first time the hijab was welcomed at a major FIFA tournament – an important but often overlooked moment in sport.

Though it took us long enough to get here, progress has been made very quickly. Nike released a pro sports hijab in 2017, making it easier and more accessible for women to take part in football, Brunel University in London became the first UK university to offer a sports hijab as part of their university kit in 2019 and Muslim women’s football teams are becoming more and more popular around the country.

But while many applaud FIFA for finally coming to their senses, there is still a long way to go and questions to be asked about their inclusion and diversity policies. The host nation of the current FIFA Women’s World Cup, France, have been no strangers to outrageous laws and regulations on the hijab in schools and public places. It was only in February 2019 that sports store Decathlon buckled under pressure and stopped the sale of their sports hijab in France.

Football is for all and it looks like FIFA finally got the hint.