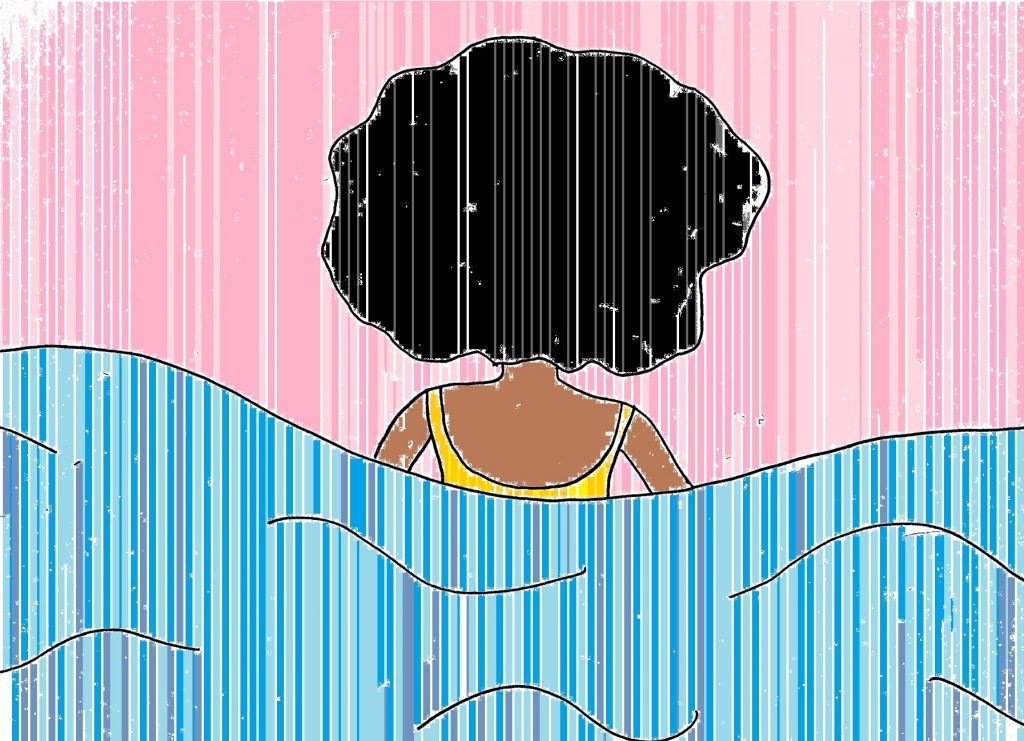 At the dinner table one evening, a couple of my housemates suggested that I join them on a university surf club trip. Surfing is a sport that they seemed avidly enamoured with. Hearing them gush nostalgically and sentimentally describing that at-one-with-the-waves feeling inspired some curiosity in me. I had thought little about surfing in the past, but this seemed like an opportunity to do something I had never done before.

And why had I never done it? Namely, because Surfing is stereotypically considered a “white” sport. As I was read about why this might be, I came across suggestions ranging from the generalisation that “black people are not into water sports” to biological observations claiming that ‘black people have a higher bone density, which makes them naturally less buoyant than white people’.

“Black people, especially black women, are in the minority when it comes to participating in water-sports on a micro and macro level”

Black people, especially black women, are in the minority when it comes to participating in water-sports on a micro and macro level. On the American 2012 Olympic team, only three out of the 24 swimmers on the men’s team, and two out of 25 swimmers on the women’s team, were people of colour (PoC). On the coach down to Newquay I was struck, but admittedly not shocked, by how overwhelmingly white the number of people on the surf trip was. Out of about fifty people, around five were PoC. I was the only black person.

So, why are black people less involved in water-sports, and more specifically surfing, than white people? Many surfers I spoke to began because they had the opportunity: they lived near the sea or had easy access to it. The most ethnically diverse boroughs in the countries are in cities; the number of black people who grew up in areas like Devon is very small, and therefore the number of black people who had close access to the sea growing up is correspondingly small. Alternatively, for people who grew up in cities, it was on family holidays to the coast that surfing became a hobby. Although my family and I went on holidays to the coast, we definitely did not go surfing. Growing up, I accepted water-sports as bougie activities available to the middle classes who could afford expensive equipment and lessons.

“The past experiences I, and many other black women have with swimming pools and the sea is a complicated one”

The past experiences I, and many other black women have with swimming pools and the sea is a complicated one. When I was of primary school age, I enjoyed going to the local pool. But often, friends in my class would make flippant remarks that would make me feel like an alien under observation. At this age I wore my tight, kinky, afro curls in plaits that my mother spent hours labouring over, and when I went swimming I would receive remarks ranging from the seemingly benign “your hair dries so quickly!” to “you look like medusa, your plaits are like snakes”.

As I got older (around the age of 14) and wore a perm in my hair, I stopped going swimming regularly to avoid the hassle and heat-damage of the ritualistic blow-drying and straightening that would follow. Choosing not to go to a friend’s swimming party sparked debate among my friends that I couldn’t swim. I hated the fact that this derogatory stereotype was applied to me as I could swim, but due to the “otherness” of my hair and the unwelcome questions and comments I would receive, I chose not to. I remember my frustration at the time. I had denied myself a pleasure that my white friends could enjoy without a second thought. To many white people, including my father, this seemed absurd, even vain. After wearing extensions, and then a weave for about a year, I began wearing my hair in braids for their low-maintenance nature. I felt like this choice allowed me to venture into realms that I previously denied myself, or felt alien in. Now, like my white friends, I didn’t have to worry about my hair.

So I went on the trip. I savoured being by the sea, took a beginners class in surfing, learned the basics and finally was able to tentatively stand up on the board. This personal victory was not simply aesthetic. Although on one level I was proud of myself for learning a new skill, on a deeper level my pride was for the fact that I persisted in an intensely white environment, both spatially and in regards the sport of surfing itself.

My choice to try surfing was not an arbitrary one. It felt like an act of defiance against my previously established rejection of this white realm, and its rejection of me. It was an act of deconstructing rules dictating what is appropriate and what is not appropriate for me to take part in; ideas constructed externally and then digested and introjected.

Dismantling the internalised forces and pushing back against the external forces that dictate what activities we can and can’t do due to our blackness, is an important pursuit. We deserve full access to the menu of active and creative endeavours granted to white people without a second thought. Full autonomy of movement and identity is only possible with this access as a precondition.